Sailing Greece In October: Why You Should Go 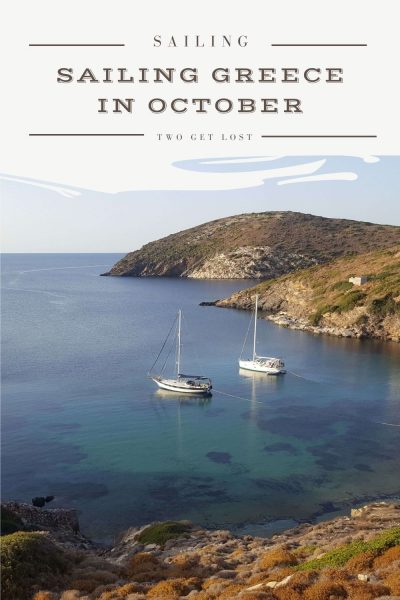 Sailing in Greece in October is often overlooked. Once the summer is over in England people assume the summer must be nearly over in Greece too, and don’t consider it as a great Autumn sailing destination.

We’ll go into the positives (and negatives) of sailing in Greece in October so that you can make an informed decision before you book that holiday of a lifetime!

Sail Greece In October And Save Some Money

The most expensive time of year for sailing is the end of July through to September. Avoiding these peak months can do wonders for your bank balance! Sailing holidays can get pretty expensive, but go during shoulder season and you’ll make some decent savings (just watch out for October half term when families might be looking for a last minute sailing break!)

Sailing In October Is Cool But Not Too Cool

October has been the most pleasant temperature we’ve experienced in Greece. Days are still warm and sunny (25ish degrees) but not so hot that you don’t want to leave the ocean. The nights are cooler and sometimes we’d need a jumper.

The sea in October was still warm enough to swim in, but getting chillier. By November swimming without a wetsuit wasn’t really possible, so if you’re a water baby then think about booking nearer the beginning of October.

If you love to hike then October is the month to come to Greece. The trails that were virtually inaccessible due to the heat in the summer months are glorious in October, and a little extra rainfall means that greenery is starting to show and the arid, dry landscape is becoming transformed.

The only negative where the weather is concerned is that you can expect a little more rain during the Autumn, and a few more thunderstorms too. Across Greece there were several big storms in the month of October, but luckily we were in the right places at the right time and managed to avoid them.

In our first season we were just south of Athens in October and we had five days of rain (and when I say days I mean a few hours on five different days!) Close the the Turkish border during our second season we had a few more big downpours.

We actually found the rain quite enjoyable, tucked up inside the cosy boat. And the great thing about Greece is that it’s very rare for it to rain for a whole week, so even if you get unlucky with a few days it will be over quickly!

Sail Greece In October And Avoid The Meltemi

If you book a sailing holiday in October in Greece then you’ll have access to some of the best cruising grounds here, that are usually reserved for only the bravest of sailors (or the most stupid!)

During the summer months the fierce Meltemi winds blow from the north during the months of June – September. Come in October and you’re in with a great chance of missing them and having that whole Aegean corridor as your playground.

We had the most settled weather we’ve seen in Greece when we sailed here in October. Perfect sailing weather with great northerlies, southerlies and westerlies to blow us around the tightly packed islands and a few windier days to test our skills. It was extremely pleasant compared to the endless horrible winds that the summer months bought with them.

Sailing Greece In October Means Having Anchorages All To Yourself

Greece is understandably a popular place to sail. Come here in July and you’ll be sharing your anchorage with at least 10 other sailboats, you can forget finding space on town quays and you had better be hot on your col. regs!

Come here in October and there is a huge difference. We barely saw another boat on our passages between islands, and it was rare for us to be sharing an anchorage.

If you’ve come sailing in Greece in October to escape the crowds and for a little peace and quiet then you’re going to be pleasantly surprised.

Where To Sail In Greece In October

All of Greece is lovely in October, but the eastern side of Greece is a little warmer all year round so your best bet is probably to head for the Aegean or the Dodecanese. This cruising area has the added benefit of being hard to sail in during the summer months, so it’s a good chance to make the most of the more settled weather.

Obviously this isn’t always the case though, so make sure you come prepared for a few rainstorms just in case!

What To Pack For Sailing Greece In October

Asides from all your usual summer clothes, swimwear (we get good quality swimwear cheap from Surfdome) and of course your snorkel, you’ll want to pack a layer or two for the cooler evenings or windier sails.

A light, windproof, waterproof jacket would be perfect and I love having a few buffs handy for keeping my hair back and my ears and neck warm.

For a more detailed list of what to pack for sailing Greece in October I’ve got it covered for you in my guide: What to wear sailing.